Les Be Honest: Addressing The 'L' in LGBTQI+ 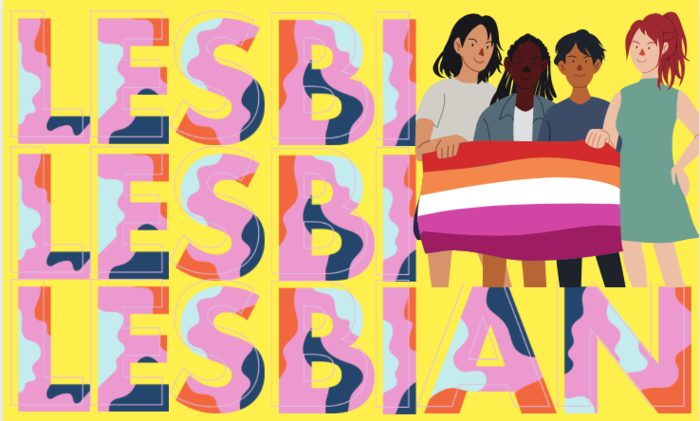 We hear the acronym LGBTQ+ very often when talking about diversity and inclusion efforts and the representation of sexualities and identifications that defy the norm of heterosexuality. What we don’t often hear, however, is specific reference to the first letter of the acronym – ‘L’ – which stands for lesbian. On Lesbian Visibility Day, we wanted to draw attention to the various experiences and relationships lesbian, bisexual and queer-identifying young women have with the term lesbian. The ‘G’ in LGBTQ+ has become an umbrella word for representing both Lesbian and Gay people, but on Lesbian Visibility Day, we think it is important to unpack the hesitancy to use or identify with the term lesbian.

The word lesbian has its origins amongst the Ancient Greeks, as its meaning derives from the Isle of Lesbos, the Greek island. The poet Sappho lived there in 600 B.C and became known for her poetry depicting a love for women. Whether this love was platonic or sexual is still contested today, but Lesbian (meaning a resident of Lesbos) became known as a term for women who love women (WLW). The term has a differing history in every location it is used, and it is simply the most popular and common term in English-speaking countries to depict female same-sex relationships. However, the term has also been historically misused and distorted into a slur, an insult, and used to impart derogatory stereotypes. In mainstream culture and in the workplace, these stereotypes and derogatory use of the term has arguably left a chasm and unease for women who identify as lesbian, gay or queer, as well as for non-queer people using the term.

In an Instagram poll conducted with 200 users from differing countries, 70% voted that the word ‘lesbian’ is still stigmatised… but no one could directly answer why.

Therefore, in honour of Lesbian Visibility Day, we have gathered the perspectives and experiences of queer and lesbian women on the word lesbian and how it makes them feel. Hearing directly from lesbian and queer women is not something that we see enough in mainstream professional spaces, yet it is the only way to help inform us on how to use the word in future and respect the incredible work of so many lesbian women who have fought and continue to fight for gender and sexual equality.

The term lesbian holds as much political value as it holds a power of identity. Most of Western history speaks of the Queer movement as starting as the Gay and Lesbian movement, and I think queer women, whether lesbian or not, owe a lot of queer liberation to lesbians. Lesbianism is often conflated with feminism by bigots, and ‘man-hating’, but being called a lesbian is anything but an insult. Overall, WLW are essential in the deconstruction of heteronormativity, sexism, and racism and I believe we need to champion all forms of WLW. Whether it be femme or butch, it’s important to acknowledge that there isn’t a scale of acceptable queerness which we can locate ourselves on to determine belonging in queer spaces.

Whilst lesbians constitute an integral part of the queer community, many women who aren’t lesbians can feel excluded by lesbians and I think this is regrettable. Heterosexism, heteronormativity, and various forms of queer-phobias, such as bi[phobia] and transphobia, have made their way into queer spaces but the solution is not to blame each other. Queer solidarities are essential if we are to ever reach a truly accepting society and if we are preoccupied with labels then we are doing ourselves a disservice. We must act as queer folk together and love our differences.

Now, I am not saying to simply forgive and forget, but rather that we are all responsible for helping queer lives in the present and queer generations to come. By working on ourselves and celebrating each other we will find our way. So, in light of this I want to thank lesbians for helping me realise that women are amazing in so many ways beyond the hetero/homo binary, and thank you for showing me some of the infinite ways that queerness is worth celebrating.

There are a lot of stigmas attached to the words used to describe members of the queer community, and hearing those terms said in a way that means they should be considered an embarrassment is enough to make you choke up every time you use the word. I've been asked, "Oh, so you're a lesbian?" before, and I'll be honest: this question isn't always asked with a friendly tone. This puts you at a personal crossroads: either ignore the term and find other ways to convey your sexuality, such as ‘gay girls,' or reclaim the term and use it as a source of power; an expression of your identity and representative of a culture. As a bisexual woman who has never identified as a lesbian, I have never had the opportunity to reclaim this word. As a result, I find myself resorting to words that might be considered less harsh, such as gay girls. Since I've been in a relationship with a lesbian girl, I've found myself relying on her strength and making a deliberate effort to use the word. After all, who else is going to reclaim the term if not lesbians?

For me, the word lesbian is a beautiful word - it's important to note that word connotations are contextual, and since I am at a point in my life where I embrace, enjoy, and love my sexuality, the word is a linguistic representation of strength and happiness. However, this was not always the case. When I was growing up, the word had negative connotations for me because of internalised homophobia, which I picked up from my peers' shared understanding. As a result of this, I didn't even consider myself a lesbian until I was 19 years old. Where I grew up is a predominantly cishet town where derogatory slurs about gay and lesbian people are popular, demonstrating that even in today’s "woke" era, there is still much work to be done. According to Catherine Lord, a queer studies scholar, "lesbians vanish not because we lack talent or numbers, but because our existence is an ontological impossibility... Lesbians are ghosted by the public sphere, not by consistency but by strategic incoherence.” This exemplifies the fact that lesbians are overlooked by society at large, which is why it is so vital for us to reflect on ourselves and regain our vocabulary so that a true representation of ourselves is put forward. We are discovering that humans are an incredibly diverse species, and that categorising individuals based on their sexuality, self-expression, or gender understanding simply cannot function for anyone due to the wide variety of experiences that vary from person to person.

Whilst I feel the word ‘gay’ has been rightfully and powerfully reclaimed, it seems the word ‘lesbian’ is falling behind, why? I have no idea. When asked my opinions on why I would prefer to refer to myself as ‘gay’ or ‘queer’ instead of ‘lesbian’, I struggled to understand why the word makes me cringe and a little uncomfortable; am I part of the problem? I’m a lesbian woman and yet I still don’t want the title of ‘lesbian’ which feels like a betrayal towards my own sexuality and self-acceptance.

After spending some time reflecting, I reached the conclusion that it’s still seen as a ‘taboo’ or ‘offensive word.’ Years and years of social injustice, discrimination, and playground teasing have meant that the word ‘lesbian’ feels undesirable for no rhyme or reason. But it’s not for no rhyme or reason, is it? As girls, we were constantly teased about being a lesbian. “Oh, she hasn’t got a boyfriend, she must be a lesbian’, ‘she has short hair; lesbian’, ‘she’s a tomboy... probably a lesbian.’ The word was never used in an affectionate way, even when people weren’t being violently homophobic necessarily, the language was always so negative, always teasing, always picking fun and this came from school, friends and even family, which made it hard to accept as a word to describe one’s sexuality as opposed to an insult, especially when I was actually a lesbian. But I’m proud to be a lesbian, I love women and it’s time we reclaim the word and wear it with pride.

When I first came out, something about ‘lesbian’ felt like guilty glances at calves under a-line skirt. It felt like kissing your husband goodbye all the while thinking about Marilyn Monroe’s bosom and then burying the thoughts behind the freshly-plumped sofa cushion or into a tray of cupcakes. It felt like runaway wives and spinster friends in houses no one visited. I didn’t want to be a ‘lesbian’, I wanted to be GAY. Gay felt like an ambiguous freedom that gave me community, friends and a dating pool - because no one was ‘lesbian.’ No one even said it. The L word. How do you claim something that no one seems to want? Something that’s scary? Something so dated, so dirty, so secretive?

A year on, I try to reclaim it. I’m a woman-loving-woman, a member of the gay community, a lesbian. I do it for those who came before me, who lived in fear of their own desires, who ripped apart their lives and faced social condemnation for another lesbian. People that would see my life, my privilege, and weep at the opportunity I have to be gay and not have to hide. They would want me to be proud of the L word. I am a lesbian.