Diversity in the Manchester tech and start-up scene, with Tom Staff 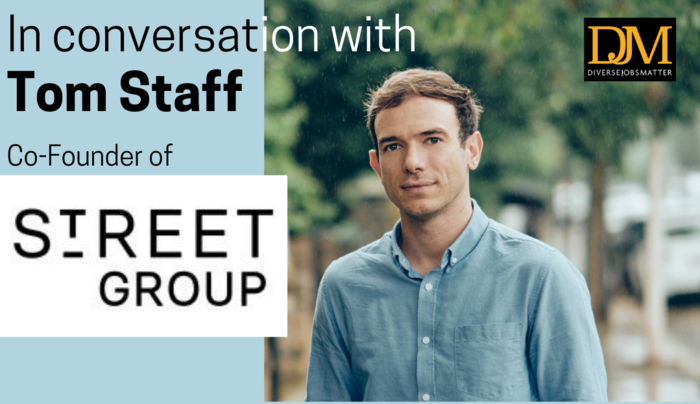 A couple of weeks ago, our D&I Manager Tzeitel Degiovanni had the pleasure of interviewing Tom Staff - Co-Founder of Manchester- based PropTech company Street Group. Back for a second instalment, Tom speaks about Diversity more generally in the Manchester tech and start-up scene, giving us some knowledge about how he feels as a leader about the growing emphasis on corporate social justice and responsibility...

I know you've worked in tech space in Manchester for a number of years, predominantly in your own companies and start-ups. Are there some glaring issues or trends that you've noticed in the tech or the startup space regarding representation, or lack thereof?

Well, I have to caveat my answer with saying that my experience outside of running my own business is relatively limited. Heather has much better experience on that front. I'm a gay man myself, and Heather is obviously a woman working within corporate – so a slightly unusual two people to be heading up and running a company, which really leads into why we've got such focus on D&I. Heather used to be a senior director at KPMG restructuring in London, so she's got the kind of big company experience, and as a consultant, she would be in and out of lots of different companies really seeing how those dynamics play out. Mine is relatively limited, because I’ve pretty much always run my own businesses. What I would say is within the tech scene, especially in Manchester, it is a pretty diverse environment. But there is one glaring problem, which is the representation of women in engineering positions. And it's a common with every single start-up founder I speak to, whether it's at networking events or anything like that. Anybody who has either half an eye on diversity and inclusion is battling with this problem.

It's a very, very difficult one to try and address as a business because you're at the end of a long string of knock-on effects. You've got control over that little bit at the end, but everyone I speak to in the Manchester tech scene acknowledges that it's a problem. I think there's a lot now being done and much more momentum being put into making changes. So one thing we're getting involved with is tech returners, which is really helping women in particular who have taken a career break, usually due to having children, get back into the tech scene. And I was shocked at how difficult most of them find it. We spoke to one of the founders of Tech Returners, and he was kind of explaining why this is so important.  I'm so used to developers always being in such high demand, and you know, if a good developer came along, you would just bite their hand off. So the idea that people were rejecting developers on the basis that they had a couple of years out for baby was a really foreign to me, and shocking. So we're currently sponsoring a cohort through tech returners and that's actually just about to finish now. Everybody within the team who's been involved with it has absolutely loved it, and a lot of them have been doing stuff outside of office hours, so they've clearly really enjoyed the process.

Yeah, definitely. When I've spoken to people who work in the London tech space, especially in big corporations and professional services companies, what they've said is that although there is racial/ethnic diversity, apparently there isn’t much mobility once they get there. So for example, if they are in engineering, and they want to move over to sales, or move up to a managerial role, they find that process really difficult. And they’re often kept within these rigid roles that are strictly tech. Have you noticed any of that, and do you think maybe that's different in Manchester? What are your thoughts on in terms of mobility?

I have to admit, I haven't personally seen that kind of issue in the Manchester tech scene. But again, that goes with the massive caveat that my experience outside of my own companies is relatively limited. And within our company we really do have quite good ethnic and gender diversity in leadership positions. But I’m aware that my thoughts are massively skewed by my experience at my own company and potential not a true representation of the Manchester tech scene. And I have been on many diversity and inclusion webinars where these issues are very striking.

It’s so great that you as the co-Founder are actively attending these conferences and taking this work seriously, and not just delegating it to a specific team. Tell me a bit more about these panels that you attend and what you’ve learnt?

Yeah, I mean, I find them incredibly useful. And it mainly just really makes you think about things that you potentially wouldn't before. A great one that I took from the last one I was on was asking somebody before they attend an interview whether there are any adaptations to the process that they might require. Because, you know, before they arrive at your premises, you might not know that they're in a wheelchair, for example. And even if your company is set up with wheelchair access, if it takes you by surprise on the day, and people are flustered, it can create a horrible experience for the candidate. And then there's also non-visible disabilities. So usually, part of the interview process is doing a task. If you're on the engineering side it’s usually a tech task, and if you're on the commercial side, it’s usually some kind of verbal reasoning test. But they'll almost always involve reading. I'm dyslexic myself, but I have never thought of asking somebody, “do you need extra time to read?”. It’s been a massive learning experience for me, and that's something we've added into our process now. So even if we are already set up to accommodate something, we make sure we know about it beforehand, so that interviewers aren't flustered and create a really unpleasant or awkward first impression. So yeah, it's little things like that that cost has nothing to do, and but massively improve the candidate experience.

That's fantastic. And it also takes that onus off them to have to say or ask about requirements or changes. Taking away that worry that it’s going to disadvantage them in any way is so important. Going out and asking them “Is there anything you need? Anything you'd like us to be aware of?”. Because then you've asked, and then they feel supported and not like they have to carry that responsibility to get through the door, literally.

Yeah, I mean, the example they gave in the talk was that they had a candidate who was in a wheelchair, and they had the wheelchair ramp. But they didn't ask the candidate before they arrived whether they would need any kind of special assistance or anything for the interview process. So the candidate arrived and the wheelchair ramp was on the other side of the building, which was about a 15 minute round trip, and somebody had to go and usher them to where the interview was being held. And so the first experience that candidate had was ringing the buzzer, somebody arriving, and then being there for 15 minutes. So he said, even though they were technically set up to be wheelchair accessible, they hadn't asked the question and weren’t practically equipped, and so they lost that candidate, who was brilliant.

Absolutely. That culture of accessibility has to run quite deep and really be integrated into every part of the process. My last question for you is kind of zooming out a bit at the events of the past year. What are your thoughts, I guess personally, but also as the leader of an organisation, on the social issues that have erupted, especially during the pandemic, and any thoughts on corporate responsibility and corporate social justice as it's coming to be known?

Yeah, that’s a really good question. The first thing is that I think being in tech is naturally a very liberal kind of space. And sometimes it is easy to forget that you are in this liberal tech bubble, and that this little bubble you live in is not representative of wider society. I think we all, especially big corporations, really do have a responsibility. And I think the time of “stay quiet, don't get involved as a business” is over. I think now, consumers and clients want to see us take a stance, and they want to see that our beliefs represent their beliefs. And I think people now are seeing silence on these issues as almost more damaging than you coming out with an opinion and maybe it not be the same as other people’s. So firstly, I think corporations and companies have a responsibility on these kinds of issues. I think me and Heather talks about this often and we both agree that as the leader of an organization, you are in a position of power, you are in a position of responsibility, and we have the responsibility of shaping the environment that quite a few people spend most of their life in right now. So we take the responsibility of making sure that that space is a nice place to be, no matter who you are, or where you come from, really seriously.