Has the Covid-19 pandemic stagnated efforts towards diversity, equality, and inclusion? 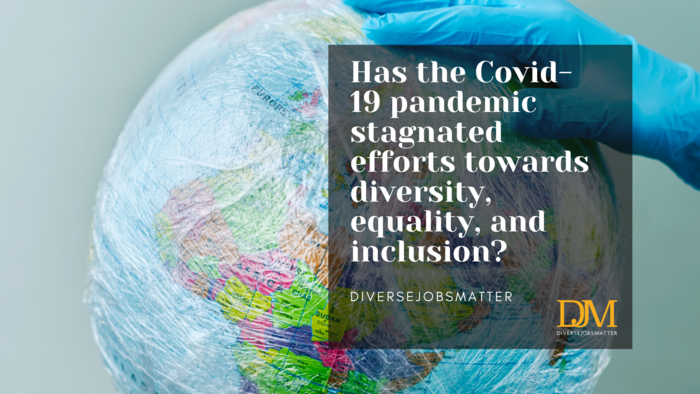 Has the Covid-19 pandemic stagnated efforts towards diversity, equality, and inclusion?

An overview of the gender parity discussion:

Gender parity is one of the significant fights for equality within the workplace, from tackling the motherhood penalty to mental health and the difficulties of juggling single parenthood about gender parity, hiring opportunities and promotions/ career advancements.

Covid 19, or coronavirus, is something that every individual has heard of over the past two years. The global pandemic completely changed the way individuals work, travel, and interact with each other. Drastic changes have taken place in our daily lives, and only now are we starting to return to some semblance of life in 2019?

What was the new normal?

From commuting, dressing formally to regular in-person interactions, meetings and projects, everything slowly stopped. Everything became digital; of course, this is not something unheard of as this is something that many individuals had to undergo as national lockdowns were implanted across the globe. Families and couples entered a new normal of constantly being around each other and often worked in their living space. This article is being written in a post lockdown era.

Before Covid-19, many goals were put into place to ensure equality and gender parity. In particular, gals were put in place to ensure that nations were making public efforts to ensure that all individuals had fair opportunities and equal experiences when entering and progressing through the workforce. Though progress for gender parity stagnated prior to the covid-19 pandemic, many more issues arose from the pandemic the disproportionately affected individual of different gender and women in particular.

How were women affected?

During the pandemic, many families and couples were living together under duress, forcing many women to revert to the role of homemaker. Often this was done in conjunction with their jobs as well. Women were often seen taking on a higher portion of social and personal care and child-rearing responsibility within the household. Activities can include childcare and cleaning, and household maintenance. The Guardian has labelled this as the ‘motherhood penalty’ [The Guardian]. Women were already denied paid work, pay raises and promotions due to the prospect of them becoming mothers of currently having care responsibilities. This has been reported by the UK Centre for fiscal studies. So many mothers and women, in general, are unable to find suitable paying jobs because often care responsibilities are often placed on the mother. The pandemic has only exacerbated this gap, with women deferring to childcare responsibilities more than paid work when quarantining with their entire families during the lockdown. However, it is also important to mention that in a study conducted by the OECD that whilst men were taking on more household responsibilities, women were still recorded as doing double the work of the men they were sharing care responsibilities with.

Some researchers do question, has much changed from before?

Until the pandemic, it has been researched and recorded that many of the UK female population, mainly migrant women, undertake lower-paying jobs or are often unemployed for social care responsibilities. The same Guardian article cited above stated that men made more because their jobs launched more risk, whether physical, mental, or financial, which left minimum or lesser paying jobs. Yet, when looking at the dynamic of employment in the pandemic, jobs classed as essential: medical, transportation, supermarket staff and more were considered virtual workers. The covid era was when minimum wage jobs became needed tenfold and were also some of the important jobs with risk attached.

There are many different scopes of understanding administrative data at how companies use this to implement new initiatives and policies regarding job security, pay, and so much more. This coming month, DJM will be releasing a comparative essay style article that will take an in-depth look at gender parity across the UK and in some other international regions. Gender parity was one of the significant fights for equality within the corporate environment. I will also be releasing a podcast on this blog for anyone who needs or prefers to listen to audio material coming out soon!