In Conversation with Tate Smith: On Trans Visibility, Voices, and Education in UK society 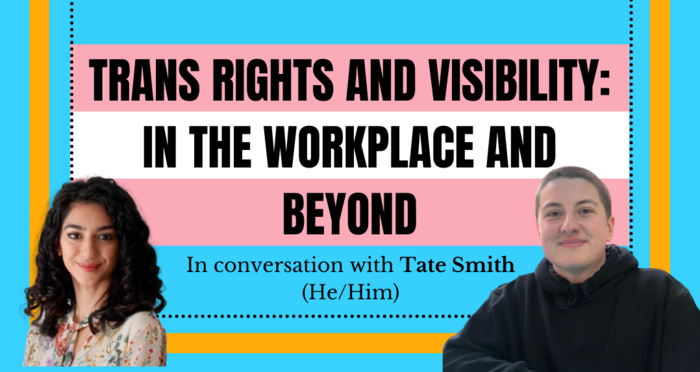 A few weeks ago, our Diversity and Inclusion Manager Tzeitel Degiovanni had the pleasure of sitting down and speaking to Tate Smith - Junior Legal Support Secretary at Clifford Chance and Lead on Arcus - the firm's LGBT+ network - Education and Awareness Pillar. As the firm's first openly trans person, Tate helped to re-draft the 2019 Trans Policy and has hosted two Lunch & Learn sessions on what it’s like to be both gay and transgender. He has featured in interviews by Global Butterflies, Legal Week, Mygwork, and now DiverseJobsMatter.

One of the first questions I would love to ask is about visibility. In most spaces, but especially in corporate and workplaces, we don’t see enough trans men or women. Not in the media, in marketing, in the board-room, in decision-making, and so we don’t see or hear about their experiences. What are your thoughts on trans visibility?

I don’t think there’s enough visibility for trans people across the board, completely. Especially within professional workplaces. Panels have become the only thing where I see trans people, but where I do see these trans panels or anything similar, I see a lot more trans women and little to no trans men. And it’s not great to see because I think it’s a reflection of what the general public think of as trans, because when we think of transgender we stereotypically think of a 6 foot bony-looking man playing dress-up, wearing women’s clothing… we don’t think that being a trans man is a thing, we think that they’re just lesbians or tomboys. So there’s not enough visibility at all and where there is, it's kind of up-and-coming. So I really think that workplaces and the media can do a much bigger and better job of making sure they’ve got trans role models and they’re telling people’s stories and that they’re telling them in the right way as well.

It’s important that it’s not just coming from a cis-male voice; it needs to be a very unbiased, open conversation and very educational which de-bunks common myths. Take Pose for example, which is a very popular TV show. It’s incredibly empowering and revolves around sisterhood and female empowerment and how important those drag mothers were to the transwoman at a time when there was (and still is) so much violence against them. All of which is so important, but trans men were also part of the ballroom scene, it’s just that they have since been written out of that history. So in the wider media it’s important that when we’re telling trans stories we’re telling stories about and across all the trans spectrum, not just the stories of one group of people. The Trans community is a large and comprehensive group with trans people, non-binary people and everything in between, but not enough stories are being told that reflects that. We’re getting there, but it's so slow and that’s why it's so frustrating.

What do you think are the steps that need to be taken to address this?

There’s not one particular person or body who is responsible for that or to blame, which is why I feel so passionate and work as hard as I do to be visible, get my story out there, and use my voice to platform my experience and experiences like mine. I want people to see that yes, trans men do exist, and yes, you can be gay and trans and I want to de-bunk all of these myths. But also be the role-model that I never had.

I didn’t realise I was trans until I was 16 but I work with trans children and they consistently show me the importance of being visible and I want those little struggling trans boys to look up to me and see someone who has moved out, self-funded their own transition and is on his way to becoming a lawyer - and know that is a viable future. There’s huge power in that because when we see stories about trans people we see narratives of gender dysphoria being a mental illness, that we’re crazy, that we typical work in low-paying jobs, that we don’t succeed in a heteronormative world, we’re the punchline… but we don’t ever think of trans people as being working professionals, which we are and can be. There’s a huge stigma that all trans people are sex workers, and unfortunately for many trans people this is work that they are pushed into because current systems of formal paid labour exclude them – but that isn’t the rule and things are absolutely changing, and I feel really proud to be an example of that.

I think a lot of people have the attitude that because it doesn’t affect them, and they think only a small minority of the population is trans, it’s not a big deal and not worth them doing something about…

Definitely. Which is why the new UK 2021 census  is so great. So even though we won’t know exactly how many people identify as trans or non-binary because there are some people who still won’t be open on their form, we’re going to get a much better idea of how many trans people there are living in this country. We know they are currently 1% of the population, which is already a lot of people. So when you think of the context of workplaces, that’s a handful or so of people who are working around you that actually identify as trans or non-binary or non-gendered. I don’t think people actually realise how many trans people there are. Even myself, I know a handful of people at Clifford Chance but I watched a webinar for another law firm and there were four people. But we just don’t realise how ‘normal’ or common this is.

It was so nice to be able to watch your interview with Global Butterflies and see a real person and a real story, it just added so much of that human experience back into dialogue around transness which we rarely get to see in the media

Thank you so much. But yes, absolutely, I was actually talking to a friend of mine the other day about an aspect of my transition and she said really nicely that she appreciates me so much and that she just wouldn’t be able to explain it herself to other people. Because some people don’t even know what a trans man is, let alone what we actually have to go through every single day physically, psychologically, socially and in the workplace.

What are your thoughts on the subject of speaking about transness, and conversations regarding gender and sexuality more generally in society?

Some people don’t even feel the need to talk about it or disclose their transness. The amount of people that I assume are straight but when I ask they say “no I don’t really have a label” but they don’t talk about it, or have to shout from the rooftops about it. At the end of the day we are human beings and gender identity and sexual identify are fluid things. And there are so many more sexual and gender identities out there than we realise. There are so many people in history who have lived beyond the gender binary, like Joan of Arc for example. If David Bowie was performing and coming up now, he would most likely be non-binary. He didn’t say it at the time but the only word we had for that back then was androgynous. Prince said it himself – “I am not a woman, I am not a man, I am something you will never understand”. I’m pretty sure if he was coming up now he would find identification in one of the fantastic terms we do have now.

And it really is a life changing moment when you find a label that fits you. I came out as trans when I was 16 because before I didn’t know what on earth trans was and I didn’t think it was possible to transition. I only knew what gay was because it was used in a derogatory way. I didn’t know what a lesbian was, I didn’t know anything about the gender spectrum because those conversations were just not happening. For closeted trans boys especially you’re just told that there’s androgynous and there’s tomboy and there’s lesbian, but the option to transition is never presented.  And the conversation around gender identity, like boys wanting to dress up as women in makeup etc., was always related to sexuality and so the idea was that if you wanted to be trans you also would then change who you were sexually attracted to. But gender and sexuality are very different things and that’s one of the reasons I'm very proud to be openly trans and gay, because people just expect me to be attracted to women now that I have transitioned. I’m very straight-passing, my face is masculinising well and I have a very deep voice, so people expect me to be heterosexual, or assume I was a lesbian turned a man, or transitioned so I could be with more girls. But really I’ve always liked men and people say “well why did you need to transition then?” – and it just has nothing to do with it. The presumptions that came out of me transitioning were both hilarious and ridiculous.

You very openly and candidly speak about your identity as a trans man, which I think is so amazing, as it really does teach so many people about the realities and lived experiences you go through. What is your ethos around that?

When it comes to transness I am very open and leave it all out there. And it’s because people are rude to me, I get such rude things said to me and people just think they can ask trans people whatever they like because we’re trans, we’re alien, we’re something different or a novelty. And it is just not appropriate for someone to come up to me at my desk for example, which is what happened to me at my last workplace, and ask me if I’m having bottom surgery or not - its none of your business. People are obsessed with asking about trans people’s surgeries, what their names were before, or whether they were attractive before they transitioned? I don’t know how people think it's acceptable to be asking those sorts of questions, and this is why I feel so passionately about being an openly trans gay man. Firstly because there just aren’t enough role models out there being visible in the workplace and in a legal setting, being both gay and trans, but also, to educate people on the correct terminology and what is and isn’t okay. A lot of trans people don’t want to talk about their trans experience and that is absolutely fine, but for me you can ask me anything that isn’t offensive, and I’m always going to turn it into an educational opportunity. I’m going to call you in rather than call you out. I think it’s a lot more powerful as I feel that I have a responsibility to represent myself and my identity when I speak and interact and I want to debunk the myths and the stereotypes that continue to hurt and damage us.

But the best thing to do before you ask anything is ask yourself – Would I like it if someone asked me this question? And usually they get their answer.