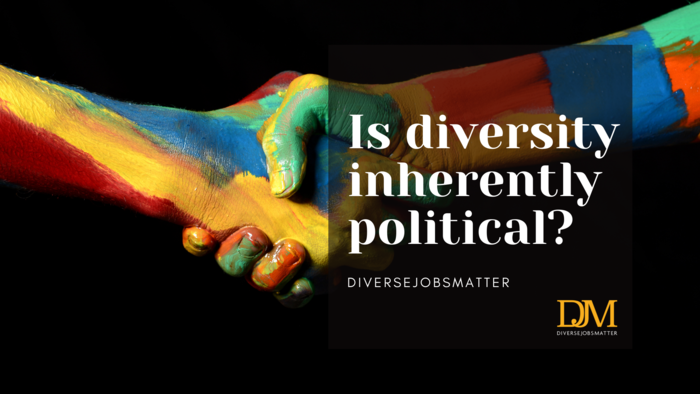 Diversity and inclusion initiatives have become the cornerstone of the recruitment and staffing industry. These initiatives have paved the way to ensure equal opportunities for potential candidates and employees, yet many of you will have noticed. Diversity discussions are not simply egalitarian and discussed for the greater good and equality. Rather, they are debated and seem like they are inherently political. There are many questions to think about between the dichotomy of politics and diversity. It is a negative thing for diversity to be discussed politically and what ramifications does it have? Should we be politically discussing diversity at all?

How do diversity discussions impact the workplace?

To get us started, this blog will talk about the benefits of talking about diversity regarding staffing, recruiting, and the workplace. Equal opportunity is at the crux of variety, ensuring that employers tend towards candidates because of merit and skill instead of any demographical characteristics. On a more significant level, discussion on equal opportunities has also led to legislation and state mandates such as the Equality Act 2010, which protects workers against discrimination based on the following characteristics: age, race, religion, sexuality, gender identity, marriage & civil partnership, pregnancy, [dis]ability. This applies to the hiring process and omitting bias and when hired and working in the workplace and addressing termination reasons.

So how exactly can diversity discussions get political?

Some scholars, politicians, and individuals state that discussions on diversity can not escape politics, as politics is a discipline associated with governing bodies and having power over other parties and people in its most simplistic sense. In this capacity, when you assess private hiring institutions, staffing and management teams assessment will be important in demonstrating whether diversity is believed to be a political subject topic. When looking at variety from a political perspective, there is an understanding that certain dynamics have been normalised as being more superior, powerful or dominant, such as private school vs state school education, white privilege vs being a person of colour or an underrepresented minority race.

The politicisation of these discussions can occur when discussing how certain groups of people can unwilfully get privilege over other groups when it comes to getting hired, promotions or simply just treatments within the office. Key examples are that ‘whiteness’, particularly within a corporate atmosphere, is considered a dominant normative race, whereas people of colour are underrepresented across many corporate industries. Whilst this statement in itself is no indication political in any way- what is political is that whiteness as a dominant race or normative culture is superior and carries certain privileges.

Are this political discussion on diversity positive or negative?

From one angle, the political manner of this conversation that are political can nature debates which can be discriminatory towards people based on their demographical characteristics. These pointed debates can negatively impact individuals finding a job, choosing their education path or much more. The UK’s social strata have changed dramatically since the change of the millennium, in which regional communities are becoming more diverse, diversity has become an increasingly relevant issue. Though with changes that have been implemented better to accommodate diversity and equality initiatives to the workforce, certain groups are left feeling isolated from the privileges that they once had. A prime example, using the critique of critical race theory is that while underrepresented or minority races are being allowed certain equality initiatives such as the name talent acquisition and recruitment movement within the UK, widely represented races such as ‘whiteness’ may feel like they are being left out with the creation of these new initiatives. Therefore, there may be a political debate about whether this initiative is promoting equal opportunities or, conversely, whether this is a display of white fragility or white vulnerability to levelling the playing field?

Of course, this is not the only example. However, it is one of the most prevalent ones. We can learn from the politics of diversity that because politics is so concerned with power and its different manifestations, diversity may be a problematic factor to separate from politics. This regard becomes more about how we talk and tackle diversity that can lead to successful and well-delegated implementations of diversity initiatives.

Here at DJM, we work hard to ensure that diversity is not a contentious subject matter for people to discuss. It is something that can be addressed and acted on openly from a range of different perspectives. A critical framework in successful diversity initiatives is listening to diverse and vital voices and ensuring open discourse that is not judgemental and discriminatory.

We aim to make our content as accessible as possible. For those who need or prefer it, audio material will be available via our newly redesigned but still ongoing podcast, hosted by Podbean!