Meritocracy in the UK: Can it ever be accurately measured? 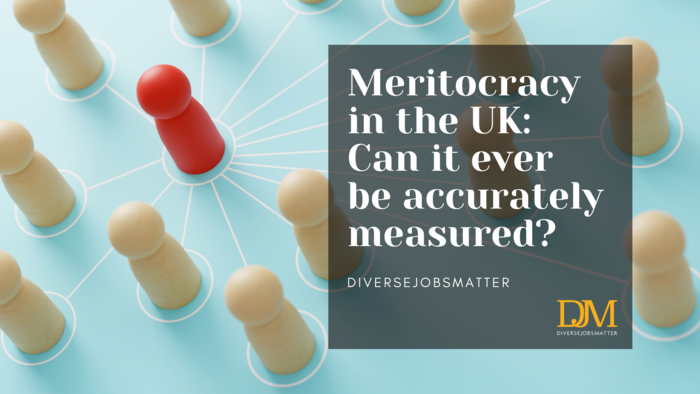 In recruitment and talent acquisition, there is a universal consensus that individuals should benefit from the fruits of their labour and be compensated relative to their skills and achievements, as opposed to having their fate destined for them by accident of birth. After all, this reflects the dictionary definition of meritocracy:

In theory, it may appear that we live in a purely meritocratic society in Great Britain and that everyone, regardless of socio-economic background and/or tangible characteristics, have few, if any, barriers to reach their full potential in society.

It is unlawful under the Equality Act 2010 to discriminate against candidates on grounds of a protected characteristic such as gender, ethnicity, pregnancy status, religious belief, and sexual orientation amongst many others.

Just over 90% of university students were state educated (The Independent). GCSEs and A-Levels (for the most part) are used as the gold standard of assessing the capabilities of our human capital. Other developing nations across the globe suffer from more economic and social injustices, a lot of which actively have discriminatory laws and policies.

How on earth can anyone suggest that the UK’s education system and current recruitment practices disproportionately benefit the most privileged in society when we already have procedures to mitigate against that? Surely the way the recruitment process works in the UK, where the law stipulates that we select the best person for the role, based purely on their qualifications, work experience, or required skills that are a prerequisite is the fairest and most objective thing we can do. That’s meritocracy, right?

What really goes on behind the scenes in the UK’s so-called ‘meritocracy’?

While meritocracy is implemented in the UK in theory (because that is the law after all), it doesn’t actually deliver in practice.

Seeing as British men with identical qualifications earned 20% less if their parents did not go to university compared to those whose parents did (The Independent) men are four times more likely to start salary negotiations than women (UC Davis), and 39% of those in leading professions are from private school backgrounds, despite representing 7% of the population (ITV News), it would be naïve to suggest that systemic barriers and social conditioning don’t stand in the way of true meritocracy. Not to mention parental socio-economic background often moulds one’s fate (Economic Observatory), and unconscious bias training in recruitment, which aims to mitigate these effects, can be widely ineffective as training can not reduce something that is implicit completely.  (Be Applied).

Where do we also draw the line with networking? Of course, it’s easier to recruit when you already have first-hand knowledge of someone’s capabilities and skillsets and how they would benefit your business, but what about a culture in the UK where it’s commonplace for more privileged university students and graduates to secure work experience due to familial connections (The Guardian), widening the divide even more? What about the plethora of amazing unpaid internships on offer, which – let’s face it – is only accessible to young people who have the luxury of relying on the bank of mum and dad?

It is human nature, after all, for parents to want the best for their children. It’s only understandable that they would utilise all the societal privilege they have to empower their children. But is it acceptable that we have a system that allows for this inequality to occur? Especially when other European countries seem to do a better job at levelling the playing field (World Economic Forum).

The Nordic Model – Have other European countries, renowned for social mobility, got this meritocracy thing, right?

We’ve heard it all before – the Scandinavian world and certain other western European nations have a reputation for being left-wing socialist utopias, and home to the happiest people in the world (Copenhagen Capacity). Their high-tax economies and big government culture often serve as counter-arguments to right-wing governments across the globe; “But look at Sweden!”, they’d say. “If they have the resources and money to empower oppressed communities, so do we!” It has once even been joked that if you really want to live the American dream, you should go to Denmark (Click through to the video here).

But is it all just too good to be true?

The research has shown that the economic model in those nations, which lends itself to higher social mobility, does indeed reflect the definition of meritocracy better. The education level of parents is a less reliable indicator of a child’s fate in Scandinavian nations and other European countries such as the Netherlands and Austria, less so than in the UK and France (World Economic Forum). It’s more than just education that helps our precious human resource realise their potential.

The Nordic Model does not come without its flaws, not that anything in life really does. Diversity quotas are often used to help level the playing field between men and women in the workplace, but they only solve the problem superficially (Be Applied). It’s a rather simplistic solution to a complex problem (not least when you consider intersectionality).

One also questions whether the relatively low populations of those countries compared to the United Kingdom (we’re talking a few million compared to the UK’s whopping sixty-seven million) makes it easier for those nations to have a narrower gap between the rich and poor in society. These are all complex factors that have no simple answer or solution.

The popular belief is that meritocracy is just a fallacy because of the structural inequalities in society that hinders it, hence why it has been coined ‘myth of meritocracy'. But perhaps we need to rethink how we measure merit.

What does it actually mean when someone has merit? One may fall victim to the halo effect by being won over by a seemingly sparkling candidate, who is a graduate from a Russell Group university and who also undertook a coveted internship at a Big 4 firm, not realising all the advantages said candidate may or may not have had to help get them there. Said recruiter may even turn down another applicant from a ‘lower ranking’ university, but with more experience and knowledge of the professional services industry in a less well-known firm, all in the name of ‘merit’.

Maybe meritocracy isn’t what we think it is. Many people measure merit by the wealth and power one holds, but when the lockdowns during the coronavirus pandemic stopped the world in its tracks, it only highlighted the importance of people in blue-collar jobs and how we take them for granted. And yet they are ignored at best and mistreated at worst.

Ultimately, we have reached an age where social justice is an all-time hot topic. Organisations are recognising the benefit of utilising more of our diverse and valuable resource that is human capital, and that it never made business sense to have a homogenous ‘boys club’ workforce. But we’re not quite there yet.

Here at DJM, we aim to make our content as accessible as possible so for those who need or want audio content, it will be available in the form of a podcast coming to you this week!