Microaggressions: Taking the Onus off the Victim 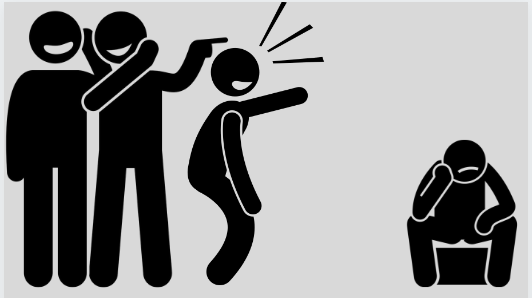 What is a microaggression?

Microaggressions are commonplace verbal, behavioural, or environmental indignities that communicate hostile, derogatory, or negative slights and insults toward disadvantaged and oppressed groups*. Microaggressions are often delivered unintentionally in the form of overt snubs or dismissive looks, gestures, and tones. These exchanges are so common in everyday conversations and experiences that they are often ignored and glossed over as harmless and innocuous. However, microaggressions can also be deliberate and intentional attacks, representing the perpetrator's prejudices toward members of oppressed groups. The term "microaggression" refers to interpersonal interactions, whereas "macroaggression" refers to systemic and environmental discrimination based on social structures and institutions.

*It’s important to note that since the term was coined by Chester Pierce in 1970 to describe the specific microaggressions faced regularly by the African American community, it has since developed to include a myriad of marginalised groups.

A microinsult is a type of rude and offensive communication that insults and diminishes a person's identity. Microinsults are subtle snubs that send an offensive message. For example, if a white employer tells a prospective employee of colour, "the best candidate deserves this job, regardless of race," this is a microinsult because it implies token hiring and that people of colour are looking for special treatment. Microinsults also take the form of attaching derogatory stereotypes to people of colour, people who identify as queer or someone with a disability, for example.

A microassault is an overt racial derogation defined primarily by a verbal or nonverbal attack intended to harm the victim by name-calling, avoidant acts, or deliberate discriminatory conduct. Examples include referring to others as "coloured" or "Oriental," using racial epithets or slurs, and holding anti-LGBT flags.

This can occur in the workplace when a co-worker deliberately and with awareness makes a racist joke while claiming that the joke is "harmless." Other examples include deliberate segregation and/or disregard for minority groups, making misogynistic comments, or attempting to trigger a person's OCD on purpose.

Microinvalidations are communications that exclude, contradict, or nullify an individual's thoughts, feelings, or experiential truth. When British East and South Asians, for example, are complimented on their English or repeatedly asked where they were born, the result is to negate and invalidate their British heritage, giving the impression that they are perpetual outsiders. Another microinvalidation is to tell someone that “our society isn’t racist” or “isn’t homophobic” when they have experienced it first-hand. 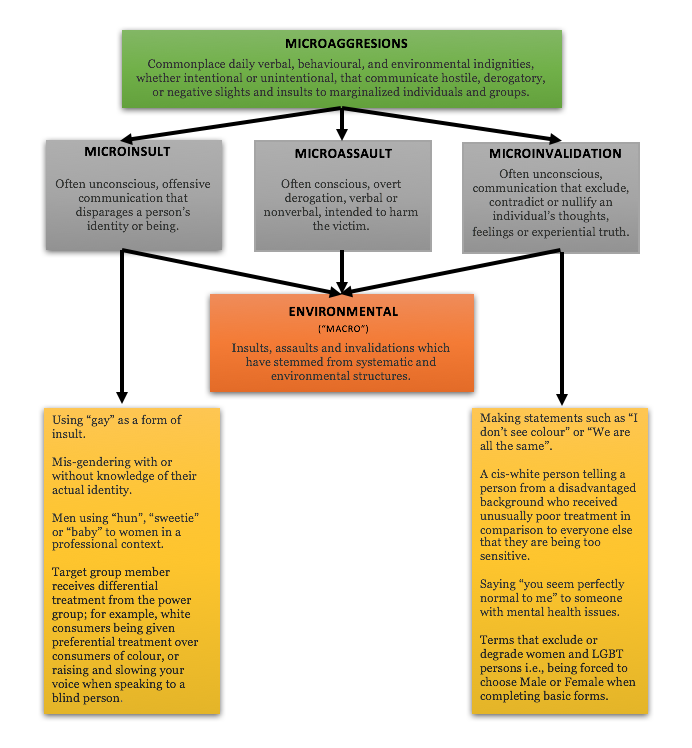 Discrimination in the workplace is common, with the statistics to show for it. Discrimination, however, has evolved from overt bigotry (which does still exist) to implicit insults in the form of microaggressions, which is why we see its increasing prominence in dialogue around workplace diversity and inclusion. Statistics highlight the importance of addressing, restructuring and improving organisational culture in order to combat discrimination.

The ramifications of this include mental health problems and a toxic work environment. According to Mind, LGBTQI+ people are two to three times more likely than heterosexual people to report having a mental health problem. In any given week, 23% of Black and Black British people will experience a common mental health issue, compared to 17% of white British citizens. More than a quarter (26%) of young women aged 16–24 years old report having a common mental health problem in any given week, compared to 17% of adults. These numbers are higher among marginalised communities because of socioeconomic disparity and disadvantage, injustice and social exclusion, and traumatic experiences. There is a causal relationship between ethnic groups experiencing discrimination and their mental wellbeing, meaning that if not handled and combated correctly, this results in an atmosphere of unease, hostility, depression, and toxicity.

When microaggressions are used in the workplace, they can have a significant effect on a person's life, leading to the feeling that they do not belong or are not welcomed. However, the way this has been dealt with (or not) within corporate spaces has historically been to inadvertently blame the victim of the abuse for “taking it the wrong way” – and therefore gaslighting them – or telling them to “stand up” against it. A toxic work climate evolves as a result of people's ignorance of microaggressions and their planned or unintentional use. Speaking up can be difficult for many people, and it is not a luxury afforded to people of colour or people from currently marginalised demographics. To do so risks confrontation which often impairs their professional stability, and has led to lack of promotion, demotion, or unequal treatment following the incident. There is acute lack of protections in place to safeguard marginalised employees from further discrimination following incidents of discrimination, which is why so many go unreported. What is more, the onus should not be placed on the victim of a microaggression to deal with that form of harassment. Employers, HR departments and inclusion teams all have a responsibility to ensure a safe working environment free from discrimination for all employees. It is not the victim's duty to correct and inform others in the workplace any time they are the victim of a microaggression. Instead, we should be taking accountability and responsibility as employers, requiring managers and HR employees to be more active in EDI efforts. Worryingly, the proportion of managers who report having a performance goal to achieve equality at work has decreased from 41% in 2015 to 32% in 2018. According to the BITC Race Report, one in every three workers, or 33%, said their organisation has at least one senior leader or champion who consistently supports equity, diversity, and fairness. The behaviours, attitudes, and acts of senior members that embody the company's principles and DNA will be instilled in the rest of the staff, so we won't see any progress in these figures unless there is an example of active and thorough discourses about microaggressions taking place, accompanied by actions in practise to combat them.

Some examples of measures that employers can take that have been adapted and developed from the BITC Report: