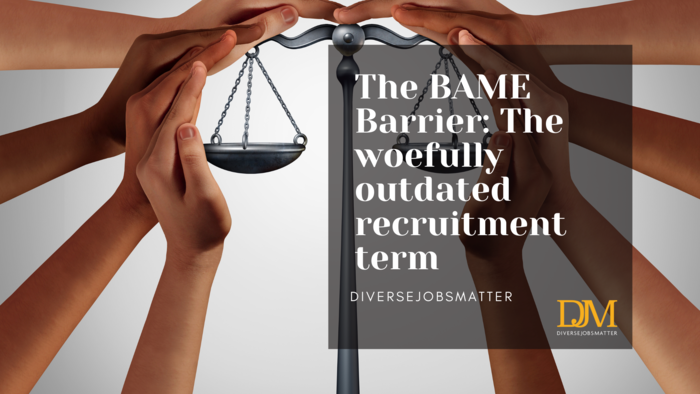 There is a significant lack of racial diversity at the top of UK organisations. This is unacceptable in 2017. Addressing racial equality is a societal issue, a moral issue, and a business issue. It must be a priority for business.

The BAME recruitment barrier: A hiring practice that is inherently problematic and isolating

The acronym BAME has become an overwhelming precursor to describing minority demographics, particularly within the media and recruitment processes. It stands for Black Asian and Minority Ethnic groups and refers to the underrepresented or minority community. For the sake of this article, I will be talking about the British community and workforce.

First, let's break down some of the problematic associations of the word BAME and why people who fall under this categorisation find it isolating.

Who falls under the BAME label in the UK?

As stated above, BAME stands for Black, Asian and Minority Ethnic. Now, this is an umbrella term used for a range of different races but also ethnic minorities. Now certain ethnicities and races are, in fact, lumped together, and if we breakdown all the different demographics, what you get is the following:

In some cases, organisations, institutions and workplaces also include 'other white as a category. This category consists of individuals who are white Irish, Australian, white French and white Polish.  These groups are also considered ethnic minorities within the United Kingdom quite often, yet are not regarded as such because often people associate whiteness with being part of the English majority. These categories enclosed under the BAME umbrella are considered via the census, which was most recently completed in 2021.

Many organisations, individuals and educational institutions have believed that the bane label was a massive step for diversity. Many individuals have found issues with the label, particularly those who fall under this umbrella term. BAME fosters different isolation and collective discrimination. A breakdown of each letter in the acronym will demonstrate why.

The term is a political signifier for the racial abuse and colonial trauma they have suffered. The term is not just used to discuss and talk about race. Instead, it is racially charged and was used as a slur towards Black individuals. The word black in itself is NOT a slur but depends on the context it is used in because rather than describing or recognising a race, an individual can change the meaning entirely.

It goes without saying that Asia is the largest continent globally and is home to 48 different countries. All of these countries foster unique cultures, experiences and, most notably, individuals. Yet, this label lumps all of these people together, simply rendering them Asian, as if there is no difference between them and their culture and identity. This also tells us that, more often than not, all Asians are considered a minority according to this BAME label wherever it is implemented within the United Kingdom. However, in some counties and constituencies, that is not the case.

Minority Ethnic is a word that should be avoided because there has been a shift in value and respect for those under this label. They are treated as less important because they are supposedly a smaller portion of the population. According to the UK council, in March 2021, there is a debate concerning replacing the word BAME with ethnic minorities. It is important to note that some of the races, cultures, and ethnicities stated above have explicitly been identified as minorities; however, in some boroughs or constituencies in the United Kingdom, they are not necessarily the majority label work universally.

There are many different ways to refer to other races' ethnicities and cultures, but BAME should not be one of them. This term lumps people together yet simultaneously isolate people. Statistically, certain ethnic groups would be considered numerical minorities within UK communities, such as Australian, Kiwi, and white Irish. This list is not exhaustive; however, these ethnicities would not regularly fall under the BAME umbrella as it is very focused on people of colour. The acronym BME has become synonymous with non-whiteness, and this term only looks at people of colour regarding white people and a white majority.

Recruiters and HR departments often use the word BAME to make their hiring strategies more diverse and inclusive. They don't realise that people who fall under this umbrella are not receptive to what it represents. Many recruiters and specific HR departments believe that the word BAME sums up or is a potential universal label that addresses discrimination against disadvantaged groups because those groups of people fall under the same disadvantaged bracket.

The CIPD [The Chartered Institute for Personal Development] released a statistical hiring report which discussed the complex findings for hiring and career progression opportunities for people of colour who are considered BAME. The hiring report's key findings demonstrate a lack of c-suite level executives and role models for people of colour in the workplace. They are also the same people who say career progression is more of a priority and simultaneous difficulty than white British employees surveyed in the study. More than half, employees of colour censor what they tell other employees about their history and background.

Some of the statistics have shown specific improvements with new EDI initiatives. For example, 3/5 of people of colour believe that the workplace environment is inclusive compared to the previous 3/10. Also, many people of colour were cited in the study, saying that training and organisation support for better performance has improved. Despite the statistics showing minor improvements in the quality of training and treatment of people of colour in the workplace, much work is to be done. An inclusive environment should destigmatise the disadvantage people of colour face. BAME recruitment often shifts the narrative from levelling the playing field and makes recruitment practices fairer to a disadvantage narrative. Being a person of colour is not a disadvantage. It is about having the same and equal opportunities for those who already have them.

Examining and evaluating workplace and hiring language is a progressive step to valuing and celebrating difference rather than universally attempting to tackle diversity via BAME recruitment strategies. Slowly organisations and individuals realise the term is woefully outdated and doesn't holistically represent individuals or address variety. It is time to stop solely addressing people of colour in comparison with their white peers. They deserve to have their status and identity and respect where a one size fits all approach isn't used to address a diverse talent pool and the job market.

There are many ways to address a person of colour without causing offence or using the word BAME, and if you are not sure, there is always the option to ask.