The Halo Code – Protecting Black People and our Hair 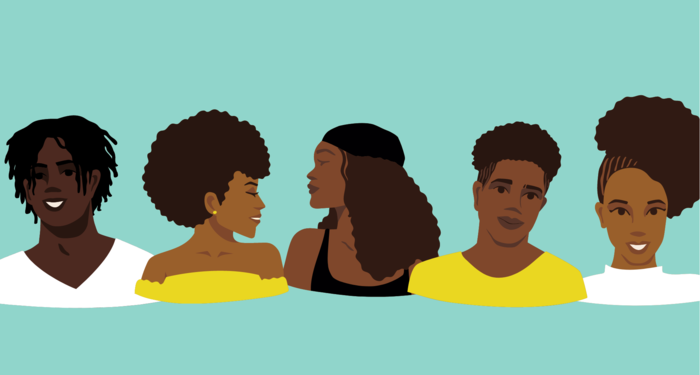 The Halo Code is a guide for schools and workplaces to prevent discriminations around Black hairstyles and/or textures. In the words of Katiann Rocha, one of the Halo Code’s co-founders, a 16-year-old based in London: “It will allow for Black people to be fully accepted in an environment that celebrates their natural hair and styles, because we’ve been discriminated against it for so long.”

In recent years, there have been highly publicised instances of Black people being discriminated against for our natural hair. In December 2018, 16-year-old Andrew Johnson, was issued an ultimatum by a white referee just before his wrestling match: ‘your hair covering isn’t protected by the rule book, so cut your locs* off or forfeit your match.’ Not long after, in early 2019, a video of a white trainer cutting his hair off went viral – igniting widespread outrage. The referee who forced Johnson to cut his hair has since received a two-year ban for his actions. Similarly, in January 2020, two Black teenagers (cousins DeAndre Arnold and Kaden Bradford) were told that they had to cut their locs if they wanted to walk in their high school graduation ceremony.

The perception of natural Black hair – with all its volume, kinks, curls, and coils – as unprofessional, unkempt, and even dirty has long-standing historical significance. Emma Dabiri, an Irish-Nigerian author and academic, whose debut book Don’t Touch My Hair was called ‘ground-breaking’ by The Guardian, has highlighted that Afro-textured hair had no stigma before the dehumanisation of Black people emerged from the Transatlantic Slave Trade. Dabiri, in an interview with Matt Elton for History Extra, also discussed the ways in which the versatility of Afro-textured hair facilitated the emergence of a ‘strong and lively hair culture.’ This culture was assaulted by European ‘explorers’ with the genesis of colonisation, and our hair became good reason to subject us to racialised mistreatment, and so we became othered, seen as ‘deviant’ and ‘inadequate.’ The forced projection of these attitudes by colonisers onto those who were colonised led to the deeply harmful internalisation of said attitudes. Our hair became a political playing-field.

Black hair is also often the subject of less overt forms of racism, seen in the entitlement many non-Black people feel that emboldens them to reach out and touch without consent. This same entitlement, compounded with ignorance, allows people to subject us to uncomfortable lines of questioning: if we do not wash our hair as frequently as others, then surely our hair is dirty? Is that our natural hair or is it a weave? 'Doesn’t your hairbrush get stuck?’ Or quite simply, ‘why does your hair look like that?’

Issues surrounding Afro-textured hair are just some of many that demonstrate the ways the concept of ‘professionalism’ is normalised coding of whiteness and white supremacy. In the words of Chika Ekezemie, a freelance journalist whose work investigates numerous social issues: ‘Professionalism Is a Relic of White Supremacist Work Culture.’ As notions of professionalism are profoundly informed by a white model of thinking, Black people have been forced to style our hair in ways that minimises its’ natural texture; to assimilate to these rigid and exclusionary professional norms and beauty standards. In order to assimilate, and thus survive, attempts to emulate European hair textures were born, namely relaxing, hair straightening, and wearing protective styles, like wigs, with straightened hair.

As Black employees and students are routinely humiliated and disrespected for their natural hair – with employee dress codes excluding Afro textures, and Black students being told their hair is distracting and unkempt - the work of the Halo Code is incredible to see. They are indeed, as they call themselves, the Black Hair Revolution. More employers and professional bodies should take their initiatives on board, especially if they truly want to be diverse and inclusive, as many are labelling themselves these days.

*I have chosen to use the term 'locs' instead of 'dreadlocks'. Please read this article for reference to why this is the preferred term for many of us with natural hair.