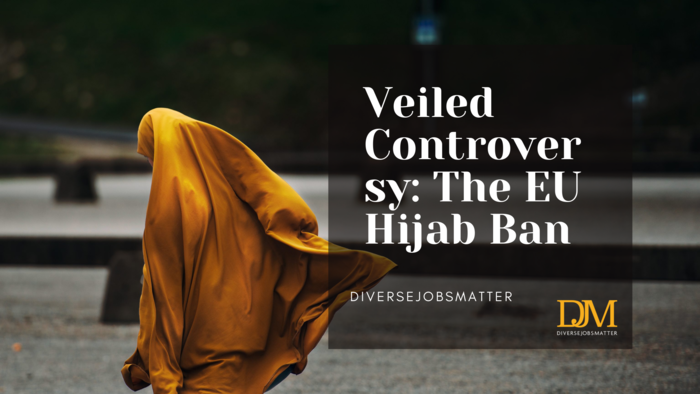 This past week an EU court ruling has caused a frenzy and sparked outrage across the Muslim community after the court started that hijabs could be banned in the workplace if they are the source of conflict and do not fit in with a brand’s neutral image.

Before we dive into the court proceedings and the ban let us talk about the hijab itself.

What is the hijab?

The hijab is a fabric or a cloth that is used as a head covering for women who follow the religion of Islam. The hijab is considered an act of religious worship and women wear it as a part of their faith, often women wear it for the sake of privacy and modesty, or because their religion requires them to. That being said, the hijab for many becomes a part of their identity, as it is something that they wear every day. The hijab is not unique to the Islamic faith, across multiple different religions there are different styles of head coverings for both men and women.

In recent years, the reputation and the image of the hijab have become increasingly negative. In a public opinion and thought, the hijab is heralded as a controversial symbol of faith. The hijab has now become synonymous with the refusal of immigrants or foreigners to integrate into the country they are in, the oppression of women, and is now also a symbol of radical religious fundamentalism.

Due to these negative views and perceptions, the hijab is widely criticized in public opinion, and now, courts and governments are making moves to have them removed from public spaces such as schools, universities, and most recently, workplaces.

Two cases were brought by hijab-wearing women in Germany as they were suspended and told to take their hijabs off in their respective workplaces. These women started off by not wearing hijabs in their workplace. However, after coming back from leave they began to wear their head coverings which resulted in workplace conflict. Their respective employers asked each of the women to take their scarves off as it did not comply with company policy. When the women refused, they were threatened with suspension, told to come to work without wearing it or find another job, the court states.

In the court, it was debated as to what was more important, their religious freedom and right to wear a headscarf or business conduct. In the end, the court ruled in favor of business conduct, stating that such bans of the hijab are possible if the company would like to present and maintain a neutral image.

“A prohibition on wearing any visible form of expression of political philosophical or religious belief in the workplace may be justified by the employees need to present a neutral image towards customers or to prevent social disputes.”

It was also stated that the justification of asking staff to remove philosophical, political or religious symbols in the workplace would have to come from a genuine place of neutrality. It is important to note, that one of the employers stated that the removal of the hijab by the employee was a justified request because they had asked another employee to remove a religious cross, citing that it was done for the sake of uniformity.

DiverseJobsMatter is an organisation that celebrates different experiences, different people have and understands how all of these unique experiences come together to create a cohesive workplace environment. This ruling has angered many, and that is no surprise. What the European Union court has ruled is grounds for religious discrimination, because if we look at each of the cases individually, what we see is women who have to pick between something that is a part of their identity and their job.

Nobody should be made to pick between those two things.

The workplace should not be a space where an individual has to mitigate, mute, and hide who they are. Workplaces should be moving towards open discourse that is progressive and inclusive of people from different backgrounds, experiences, and environments. This ruling to allow the banning of hijabs in the workplace is only a step backward, as if it were for the sake of equality then every religious symbol that is wearable should be penalised to the same degree. But to that same affect that is collective discrimination towards people of faiths in the job market and corporate space.  The ruling was made on the grounds that each respective company wanted to maintain a neutral brand image. However, the debate that this court case caused was about religious freedom versus business conduct. As the facts and the proceedings of the court case is evaluated one overwhelming question comes to mind: what does brand image and representation have to do with conduct?

In a statement to the press ENAR’s senior advocacy officer, Julie Pascoët has stated, “The Court of Justice of the EU continues to fail to protect Muslim women from structural and intersectional forms of discrimination”. When looking at some of the facts and stats this could not be truer. In a sociological study conducted by Bristol professor Dr. Nabil Khattab, that Muslim women are 70% more likely to be looking for work unsuccessfully. The unemployment rate for Muslim women was 18% whereas for women of the Hindu faith it was 9% and for Christian women, it was 4%. Dr. Khattab’s study Involved 2,643 women of different faiths. He compared educational level, language ability, and employment success in an in-depth statistical analysis. He found that 71% of Muslim women were more likely than white Christian women to be unemployed despite having the same education and language skills and in comparison, 57% of Hindu women were more likely to be unemployed than white Christian women. His study also accounted for marital status and children. Muslim women within the United Kingdom remain exceptionally low in their economic activity employment rates amongst Muslim women are significantly higher even with the same levels of qualifications and language abilities to other women. There is definitely a cultural component attached to this. However, for those Muslim women striving to develop and progress their careers discrimination is a key issue, and this EU case highlights this.

In the workplace, Muslim women become hyper-visible and that is because of the headwear that they choose to wear, as the headscarf makes them more visible they are more visible and susceptible to discrimination. Muslim women need to be provided with security and protection and should be allowed to Don the scarf if they choose to do so. Faith and religion should never be grounds to suspend, discriminate and terminate employees from a workplace.